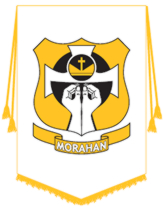 The Morahan logo includes the Mercy cross, within the School crest shape. Fr Alex Morahan was a much loved and long serving Priest of St Joseph’s Parish, Bassendean from 1971 until 2000. He was the Parish Priest during the 1981 transition from religious to lay principal and staff of St Michael’s School. The Morahan logo reflects the role of the Priest, - strong, masculine hands offering the consecration of the Eucharist in the foreground, with a chalice forming the background to this celebration . Within the Eucharist we see the symbol of the Kingship of Christ, also found on our School logo. As Christ’s role as King entailed many dimensions, so we as a Catholic Primary School rely upon the faith leadership, religious instruction and social guidance of our Parish Priests.

The McAuley logo includes the Mercy cross, within the School crest shape. Catherine McAuley founded the order of Mercy Sisters in Ireland in 1831. The order is mostly associated with teaching, especially in Ireland. McAuley established twelve foundations in Ireland and two in England and after her death in 1841, small groups of sisters left Ireland to establish new foundations in the United States, Newfoundland, Australia, New Zealand and Argentina. St Michael’s School, Bassendean, was founded by the Mercy Sisters. The gentle profile of a female wearing a habit in the centre of the McAuley logo, and against the white circle of the ‘world globe’, is symbolic of Catherine McAuley as a nun. The stars of the Southern Cross, also found on our School logo and more obviously on the Australian flag, are reflective of the new foundation that the Mercy Sisters established within Australia. Their journey and expansion throughout the world is suggested by the compass points within the Mercy cross. 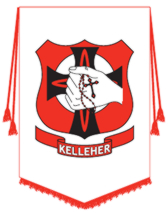 The Kelleher logo includes the Mercy cross, within the School crest shape. Sr Joan Kelleher was from the Sisters of Mercy Order and was the final, religious Principal at St Michael’s School. In 1981 the Sisters of Mercy relinquished their position as administrators of the school and the first lay Principal began. The feminine hand with its firm grasp on the rosary beads symbolises Sr Joan’s tireless work to ensure that the tradition of the Sisters of Mercy be maintained in the culture of St Michael’s School during the transition from religious to lay leadership. Kelleher is ‘passing over’ the responsibility from religious to lay. The rosary beads themself are icons of our Catholic faith. 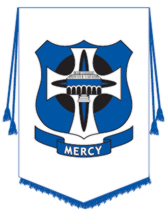 The Mercy logo includes the Mercy cross, within the School crest shape. The Sisters of Mercy who pioneered the early years of St Michael’s School, Bassendean, lived on site in the original convent building which still exists today, and which appears in the centre of the logo. The seven arches of the building are clearly identified. The stairs extend from the building and symbolise the way in which the Mercy Sisters (or ‘walking nuns’ as they were referred to in the early years of their formation) reached out to the needs of their community whilst simultaneously satisfying their own requirements to be as self sufficient as possible. These same stairs visually form the top of a ‘torch’- representative of the way the Sisters of Mercy provided outstanding leadership in Catholic Education.

Be with us always and guide us to live as followers of Christ.

Help us to show a kind heart and a helping hand to those in need.

Unite our school community in faith, compassion, truth and service as we live our Mercy values.

St Michael,
Pray for us.